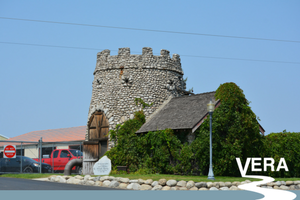 Vera’s iconic stone pump house #1 is a well-known landmark in the Spokane Valley. Sometimes affectionately referred to as the “castle”. Travelers on Evergreen Avenue are often surprised to learn that the century-old well is still in use today.

Vera Pump House was hand built in 1906 using stones dug up during the construction of irrigation ditches; these stones were also used in historic local homes. It is believed the prominent masonry craftsman, Hans Vinge, built the pump house stone structure. The pump itself lies over one hundred feet below ground.

Today, Vera Water and Power is a non-profit, publicly-owned irrigation district. However, it wasn’t always a non-profit.

In the early 1900s development of the Spokane Valley was driven by land speculators. With a modest investment in infrastructure and a far-flung advertising campaign, small land management companies believed they could turn the otherwise low-value land into productive and profitable agricultural property. One such speculative venture was the Vera Electric Water Company, responsible for Vera Pump House #1.

The Vera Electric Water Company was established in 1908 by Donald K. McDonald, A. C. Jamison, and Andrew Good, local real estate entrepreneurs. McDonald named this new company after his daughter. As the land filled up with apple orchards, the town of Vera was incorporated.

Eventually, the Vera Electric Water Company turned its ownership over to the people it served, and the organization became the publicly-owned organization it is today.